Railcolor Classic is our category about ‘classic’ locomotives in fresh paint. This time we take a good look, a very good look at the Dutch class 1600/1700/1800 electrics originally built for the Nederlandse Spoorwegen (NS). Over the years, many of these locomotives, known for their distinctive French design, switched careers and became of value to open access operators in the Netherlands. Several machines, of course, got new colorful liveries, which we will show you one by one. Sit back and enjoy!

First, let us give you a brief introduction to these Alsthom/GEC-Alsthom locomotives:

The Dutch national railways or Nederlandse Spoorwegen (NS) ordered 58 Alsthom locomotives type 1600 in 1978 and 1981. All locomotives were delivered in the early 1980s.

The 1700s with the lowest numbers were predominantly used in combination with DD-AR double-decker trains, semi-permanently coupled and in push-pull mode. These locomotives and cab-cars had automatic couplers on one side. The other 1700 electrics were used for regular trains.

NS is being carved up, renumbering and Railion

Over the last ten years, NS/Railion sold 25 of its 1600s to other companies. Many returned to service for various (new) rail operators, some were used for spare parts and eventually got scrapped. We show you the 16 liveries that have been applied to these ‘open access’ 1600s in the Netherlands. Some liveries do still exist, other color schemes disappeared again. Some locomotives had multiple liveries over time, other machines stayed NS-yellow until the end. In the infographic below we combined owners, operators, liveries, and numbers into a visual ‘multi locomotive history’: 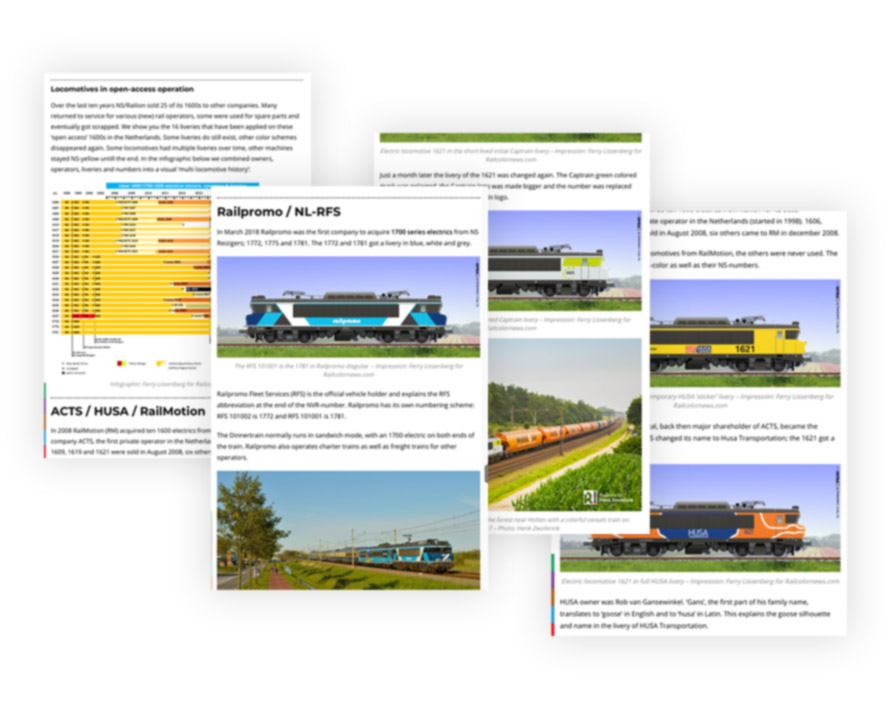 You need a subscription to see this article. Select your preferred option:

Hybrid Locomotivesmust readNetherlands
Enter your email address. Only after you clicked the link in the confirmation email, we will create a new password for you.
This website uses cookies to improve your experience. We'll assume you're ok with this, but you can opt-out if you wish. Accept Reject Read More
Privacy & Cookies Policy