On 14.12.2018 a mobile art installation on rails left Katowice in Poland, starting a tour across Europe. This is ‘Noah’s train’: Ten green containers serve as canvas for different graffiti artists from five countries: Poland, Austria, Germany, France and Belgium. 5 stops, and every time two more containers get a colourful new design – portraying animals.

We are following along the train’s journey across Europe. Current status: on 04.06.2019 it reached Munich (DE) and the Transport Logistic 2019 trade fair; scroll down to see all its stops in chronological order.

Noah’s train is organised by Rail Freight Forward, a common initiative by PKP Cargo, DB Cargo, SNCF, Lineas and the Rail Cargo Group. The World Climate Conference in Katowice in December 2018 was chosen as the starting point of a campaign that combines the idealistic ‘save the climate’ theme with an economical one: The rail operators want to boost the share of rail in overall freight transport from 18% to 30% by 2030.

The designs have a clear reference to the biblical story about Noah’s ark. Will we save the world this time?

We thank Adam Kupniewski, Alexander Eristoff and Julien Michel for sharing their photographs. 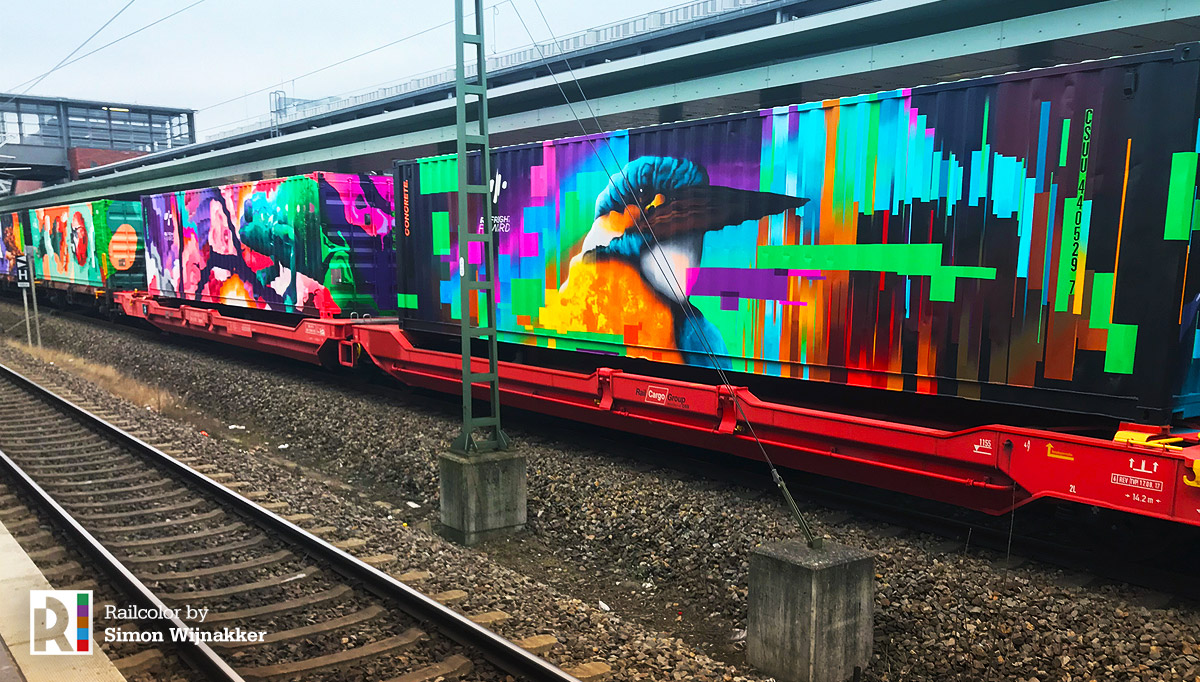 After the train left Paris, the containers were taken to Antwerpen and offloaded. Meanwhile, the Swiss railways (SBB Cargo) announced that it will exhibit a similar container, with artwork, during the Transport&Logistik exhibition in Munich, in June 2019.

As scheduled, on the 20th of February, the Noah’s Train arrived to its final EU destination – Brussels – pulled by a TRAXX F140 MS locomotive. It is curious that both 186 293 and 186 255 could be seen pulling it. The picture below shows both locomotives, coupled to its ends.

An impressive video of the train’s journey was posted on social media:

We thought this update would conclude our coverage of the train’s journey across Europe, but no. Although SBB Cargo announced that the #NoahsTrain containers would be shipped out to Chili, the containers were taken south again.

Station 6: the unexpected one – Noah’s train in Rome

On 07.05.2019 Noah’s train arrived in Rome, behind brand new Mercitalia 494 005. Again two containers with two artworks each were added to the convoy – Wolf, Butterfly, Snake and a Magpier were depicted this time. A short video:

Ferrovie.info also made a video report. A next stop has been announced too: 22.05.2019 Leipzig – International Transport Forum 2019.

Do you remember #NoahsTrain? The longest mobile artwork to protect the climate stops in Rome #Mercitalia today. Follow the journey via Instagram to see the new containers! #RailFreightForward #30by2030 https://t.co/kQimzmGdQU pic.twitter.com/fjw1bXBwUm

On 22.05.2019 Noah’s train arrived in Leipzig, with a new chimpanzee-themed container, as well as a ‘blank’ one, which was live-painted at the station by creative children:

We had a blast today at the #Noahstrain event in Leipzig! Many creative children shared their message for Noah with us. Those messages will now travel with #Noahstrain through Gemany. We are looking forward to seeing more of you on the 4th of June in Munich.
? by Michael Neuhaus pic.twitter.com/lf14rq0u9X

The train arrived at Leipzig Hbf, headed by DB Cargo’s rising European star: Vectron 193 360. We thank Steve & Patrick Wiktor for sharing the images below with us:

On the 4th of June the exhibition reached Munich in Germany. On the picture below we see it moving towards Munich North station with Vectron 193 361 of DB Cargo. Our thanks for the nice picture goes to Simon Buchmann (check out his Instagram):

The date of its arrival was of no coincidence, as this is when the Transport Logistic 2019 trade fair started. There, six European CEOs took part in a podium discussion about joint efforts to strengthen rail freight traffic. Afterwards, they sealed their joint goal by signing a painted Noah’s Train container, that was contributed by SBB:

The train made a stop at Munich East station, where a special “Kds for the Climate” container was live-painted by children:

Next stop: To be announced.